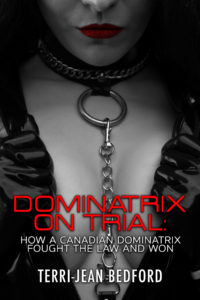 Born into abject poverty, this bi-racial girl was placed into a foster home at six, where she was abused. She was later moved into various children’s homes and lived there until she was 16, when she left to make it on her own. She survived by working numerous unskilled jobs, until she entered the world of prostitution.

She remains a vocal advocate for civil rights and the disenfranchised. She has been a plaintiff in a major constitutional challenge, and, as a result, Canada’s prostitution laws were struck down in 2010.

Because of Terri-Jean’s failing health, Madame deSade hung up her whips and is now happily retired. She is considered a feminist icon today. A play based on this memoir premiered in Windsor, Ontario in May 2022.