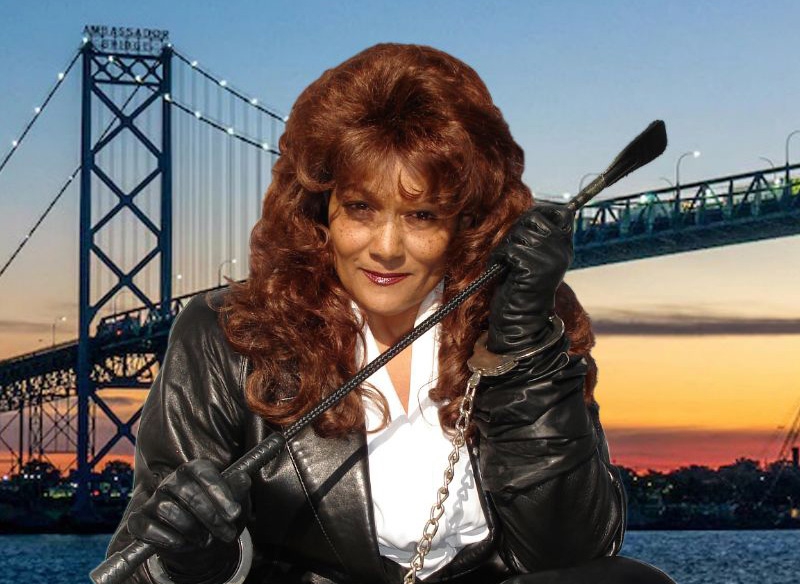 Early in May of this year 2022 The Windsor Feminist Theatre presented, Dominatrix on Trial, a play with music and dance. I wrote it with Joey Ouellette, a well known Windsor playwright, actor and director. Joey directed. The play was an adaptation of my memoirs and other writings. The play starred the talented Rebecca Mickle, portraying me. It was presented in my home town of Windsor. The play was a great success. It was well publicized and well attended. People came from as far away as New York and Toronto to see it. We had book signings, mementos were sold and there was a reception on opening night. A great episode in my life. Here are some questions I was asked about the production.

How did your book become a play?
The play is an adaptation of my memoirs. And there was, as I said, I have supporters and people who keep nudging me to do things and one of my supporters said I should write a one woman show. So I wrote one and then Joey Ouellette, a Windsor playwright, director and actor, among other things, was introduced to me and WFT had him make my play stage worthy. Covid delayed the production.

You’re a Windsor native. How much of your story takes place in Windsor?
Quite a bit. My first house was an escort and role-play facility in Windsor. I was raided in 1986. A lot of my girls I took off the street because I felt it was unsafe for them to be out there and I facilitated their needs. I gave them money and a job. If they needed a place to stay, they could hang out and I’d have their backs. I had a security personnel and everything was run really well. Even the judge complimented me on my business acumen, but I was sent to prison for 15 months for keeping a common bawdy house, living off the avails, procuring and exercising control. They threw the book at me.

It’s a serious show, but it must be a bit playful as well – after all, what you offered as a dominatrix was consensual fun.
It was an eye opener for a lot of people, and I’m really glad that it’s going to be available. But I’m really happy the story is being told. I have a lot of women that tell me I’ve had such an impact on their lives. So I hope that this is another way I can lead women to a better understanding about what’s out there, about themselves, what they’re capable of, and what they’re capable of overcoming. Yet, I’m very humbled by my experiences.